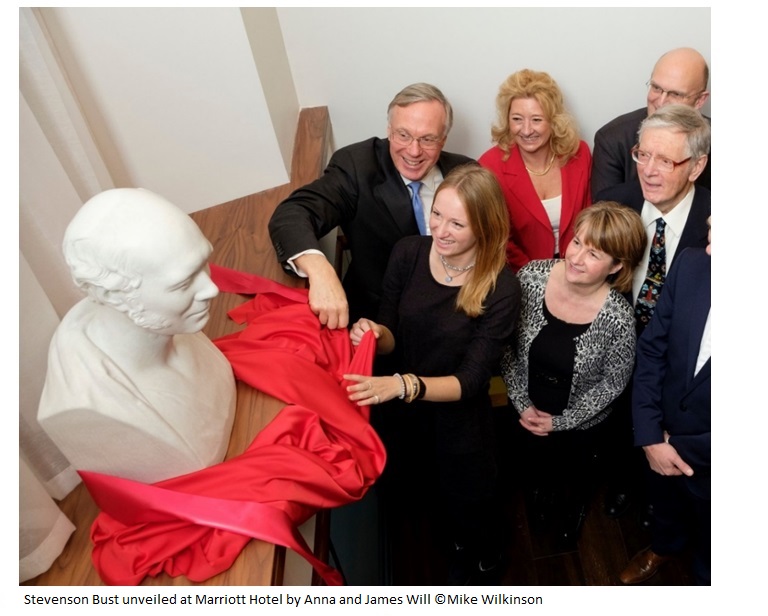 Since 1968 first as the Ancient Monuments Board and then as PHEW the Panel has significantly and increasingly recorded and promoted civil engineering and the authentic conservation of important works. Now, for the first time, in association with a heritage developer for an hotel, namely, the Chris Stewart Group real estate developers who, with Marriott Hotels, have adopted an iconic Stevenson lighthouse engineering theme in their redevelopment of Georgian Buildings at Baxter Place, Edinburgh formerly owned by Robert Stevenson C.E. This initiative that comprises more than a thousand permanently displayed images, a bust, and a plaque is one that the Panel is delighted to support.

The historical significance of Baxter Place is that the first and second generations of Scotland’s Northern Lighthouse Board Engineers, Thomas Smith and Stevenson, lived and worked there from its completion in 1804. Thomas died there in 1815 and Robert in 1850. During this period the world-renowned Bell Rock Lighthouse, eleven miles out to sea from Arbroath, was erected under Stevenson’s direction as resident engineer [from 1808-42 the Board’s Engineer and chief executive]. The success of this project enabled him to found the remarkable Dynasty of Engineers private firm that practised for widely for 1½ centuries and to establish the Scottish lighthouse service. 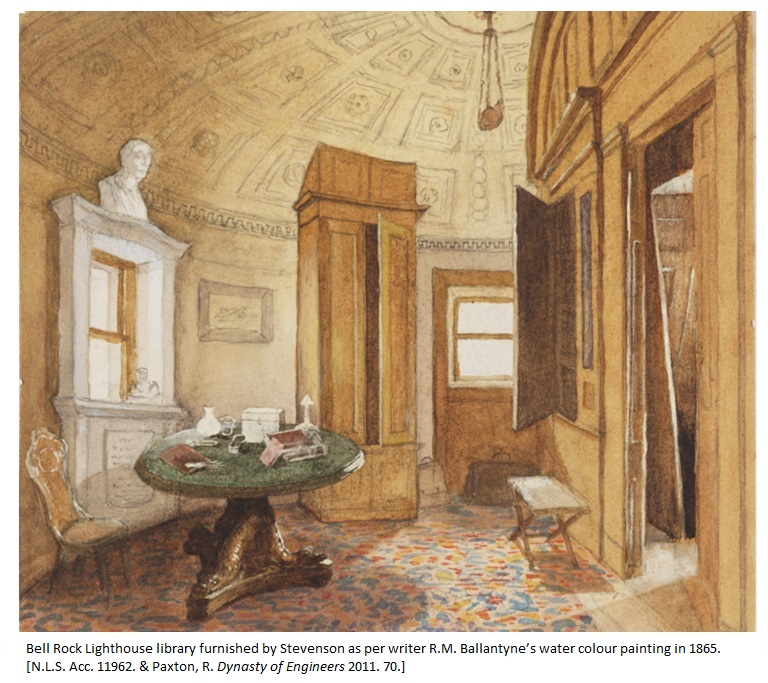 The hotel redevelopment, only the façade of which is now original, is understood to be part of a £30m. restoration project. The hotel’s modern functional layout is greatly enhanced by the maritime engineering theme now much in evidence in its public rooms and 240 bedrooms and, not least, by a finely sculpted full-size replica of a marble bust of Stevenson. The original bust was conceived by Commissioners in 1824 in the ‘Stranger’s’ Room or ‘Library’, under the dome of Bell Rock Lighthouse, as a tribute to their engineer’s ‘distinguished talent and indefatigable zeal’ in erecting the lighthouse. It was then executed by leading sculptor Samuel Joseph and from c.1828 adorned the ‘Library’, a facility enjoyed by lighthouse keepers more or less as shown, for 140 years.  When I visited in 1986 the room’s grandeur had diminished and it was in use as a kitchen.

The hotel replica bust was made from a Stevenson family copy by Clare Flatley of Edinburgh Sculpture Workshop in white jesmonite with marble stone filler. Recently it was unveiled by James Will, Robert Stevenson’s great, great, great, grandson and his daughter Anna, who has just graduated in mechanical engineering, the first member of the Stevenson dynasty to engage in this discipline for several generations

My attendance at this congenial commemoration, in co-operation with Peter Mackay Chairman of the Northern Lighthouse Heritage Trust, stemmed from advisory contributions as the project progressed and on the day, presentation of copies of the book Dynasty of Engineers – The Stevensons and the Bell Rock, courtesy of the Lighthouse Board, to Marriott Hotel staff and General Manager, Douglas Winfield. He commented on the hotel’s enormous respect for the building’s past and his expectation that the bust would provide a real talking point for arriving guests. Mike Bullock, Chief Executive of the Northern Lighthouse Board added, that it was exciting to have one of the most important buildings in the Board’s history brought back to life. He commended the Chris Stewart Group and the Hotel tor telling the story of the Stevenson family and their amazing contribution to maritime safety.