In 1970 the wife of the late Mr JM Mackintosh MBE and former Vice Chairman of the Edinburgh and East of Scotland Association of the Institution of Civil Engineers gifted to the Association several items with civil engineering connections which he had collected. The Chairman of the Association at the time, Mr Charles Roe FICE FIStructE, pondered on what purpose these objects could usefully fulfil and the idea of a local museum was germinated.

The Museum Committee was originally formed in 1971 for the purpose of expanding the collection; and soon after, quite an assortment of items was collected. The committee had its first meeting on 22 December 1971. The problem at the time was where to house the collection and how it could be looked after. In 1972, following discussions with the Royal Scottish Museum (RSM) an arrangement was agreed whereby the RSM would accept the collection on loan and curate the items.

The collection really took off when founder committee member Roland Paxton managed in 1973 to persuade Frank Dinnis, City Engineer of Edinburgh, to donate a number of old surveying instruments and a selection of equipment from Edinburgh Corporation’s City Engineer’s Department, and in 1977, William Morrison, last partner of Carfrae & Morrison, surveyors and civil engineers in Edinburgh from 1830, to donate the firm’s old instruments and equipment. In 1986 Roland Paxton took over as Chairman on Charles Roe’s retiral and in 1987 David McGuigan became Secretary. Charles Roe can be seen at the left side in the photgraph below of past Chairmen of the ICE Edinburgh and East of Scotland Association taken in 19881. 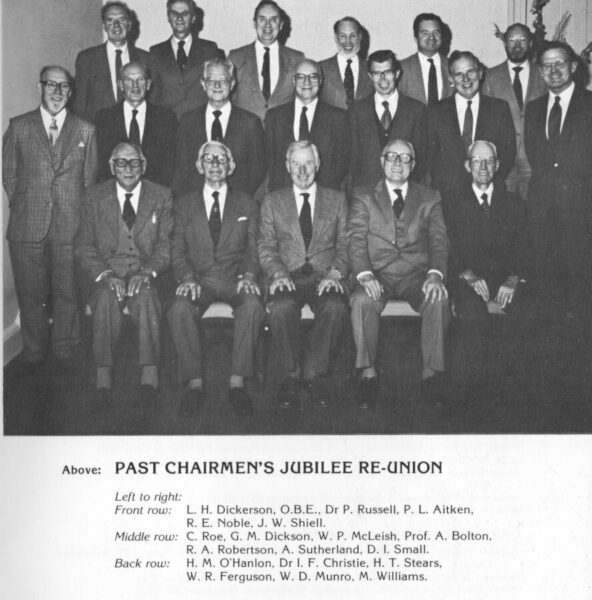 In 1990, the RSM in reviewing their responsibilities and funding re-examined the 1972 loan agreement and concluded that they could no longer support the agreement as it stood. The RSM suggested that the Association gifted the collection to the RSM and used its good offices and expertise to bring suitable material to the attention of the RSM.

Derek Chambers and John Andrew joined the Committee in 2014 and 2017 respectively.

In 2017 Roland Paxton stepped down from the Chairmanship of Museum Committee. David McGuigan agreed to take on the role as Chairman and Secretary. Roland Paxton agreed to continue to support the work of the museum in the non-executive role as Curator Emeritus.

In 2021, whilst reviewing the loan agreement, it was decided that it required to be amended to a hosting agreement to better reflect the joint responsibilities of the parties involved. As a result, in 2022 the University on its part agreed to host the collection rather than to accept it on loan.

The collection now boasts over 500 items containing such diverse items as original Telford letters, specimens of iron from 19th century world record bridge spans and Sir JW Gordon’s fine oil paintings of the eminent Scottish engineers, Thomas Grainger and John Miller, of the notable Edinburgh firm of Grainger and Miller, on long loans from the ICE and Scottish Borders Council respectively. More comprehensively the holding includes surveying and drawing instruments, flow meters and aids to calculation. There are also a number of items relating to the Forth bridges on display including a hydraulic riveting machine used on the Forth Bridge which is on loan from the National Railway Museum in York.