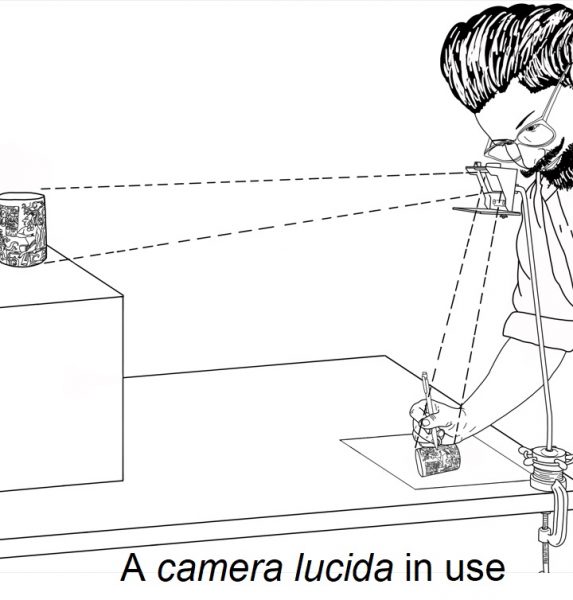 The term ‘camera lucida‘ means ‘light room’ or ‘light chamber’. The camera lucida does not require a dark space to use as would be the case with a camera obscura.

Used to assist in drawing outline sketches of distant objects in true perspective.

With this instrument there is no projected image as it is based on rather different optical principles from the camera obscura. The optical parts of a camera lucida comprise a prism, mirror and lens that allow the user to see – at the same time – the image they are viewing superimposed over (but not projected upon) the paper they are drawing on.

The user looks through the prism and can trace the image. However, this is not as simple as it sounds because as the user’s eye moves the superimposed image and the tracing will not be synchronised. This particular camera lucida has an extendable arm and a clamp. In this way it can be secured in position at one side of a drawing board or sketch pad with the prism set at a convenient height for use. The extendable arm is graduated on a non-uniform scale with positions 2, 3, 4, 5, 7, 10 and D.

An example of a sketch using a camera lucida is held in the collection (see here). This was made by George Rennie in 1822 from a bust of his father the emninent Scottish civil engineer John Rennie (1761-1821).

The camera lucida was extensively used by engineers and others in the earlier part of the 19th century to record faithfully what was on view. One striking example of this is contained in Captain Basil Hall’s 1829 publication of a visit he made to North America in which he made a number of sketches using a camera lucida (ref: Captain Hall, B, RN. Forty etchings, from sketches made with the camera lucida, in North America, in 1827 and 1828. Cadell & Co. Edinburgh; Sipmkin and Marshall, and Moon, Boys & Graves, London. 1829. [from Professor Roland Paxton’s personal collection]). Plate XVIII is one of the forty etchings from the publication produced from the camera lucida sketches and it is reproduced here in Figure 6: Frame work of the bridge across the Congaree. Hall’s use of the camera lucida was all about faithfulness. In the preface of the book, he writes:

“This valuable instrument ought, perhaps, to be more generally used by travellers than it now is; for it enables a person of ordinary diligence to make correct outlines of many foreign scenes, to which he might not have leisure, or adequate skill, to do justice in the common way.”

The British artist David Hockney believes (controversially) that many old master painters may have used a camera lucida to assist them in sketching outlines. He is of the opinion that Van Eyck and Caravaggio (amongst others) might have used a camera lucida because some changes in painting style coincided with developments in the science of optics.

The museum is interested to know your views on using the ICE Scotland Museum website. Please complete this short questionnaire to help us make it more useful to users. It should only take a minute.
Please click here to take the survey.