Cast iron axle stand (c.1820) found during the Laigh Milton Viaduct Conservation Project at or near the viaduct (1995-96). Given the proximity of the stand to the railway it may have been used with railway wagons. It may, however, have been made for agricultural use.

The underside of the base of the stand has two opposite upstands providing a longtudinal 6 in (152 mm) channel (see below). 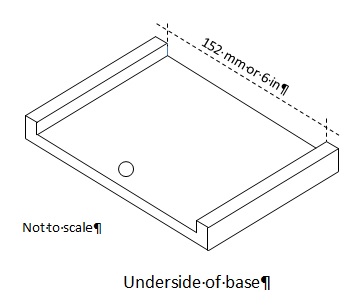 This viaduct on the Kilmarnock & Troon Railway, believed to be the world’s oldest viaduct on a public railway, was the work of leading civil engineer William Jessop. The double-track, horse-operated railway was opened in 1812, mainly for the export of coal, although it soon carried passengers. In 1816 it was the first railway in Scotland to operate with a Stephenson steam locomotive; nine years before the Stockton & Darlington.

Numerous significant railway relics were found during the restoration and this is just one of a number of them donated to ICE Scotland Museum.

For a detailed description of the conservation works click here.

Professor Roland Paxton wrote a paper for the Journal Historical Studies in Civil Engineering of the Japan Society of Civil Engineers. To read the paper click here.

For a film of the restoration works click here.

For an article on the history of the Kilmarnock & Troon Railway written by John Yellowlees in the Scotsman newspaper (dated 25 August 2022) click here.